This part of the Energy Efficiency Manual explains how to improve the efficiency of heating with radiators and convectors. These heating units distribute heat solely by radiation and/or convection that results from the surface temperature of the unit. The heating surfaces may be exposed or enclosed.

The distinction between radiators and convectors relates to their different modes of heat emission, as their names imply. Radiators have large, hot surfaces that are exposed to occupied areas of the space. This allows them to transmit a large fraction of their heat output by radiation. Radiators also release a large amount of heat by convection.

Convectors release heat primarily by convection. They heat the surrounding air with fin coils, and the warm air circulates through the space by convection. Convectors typically consist of long horizontal heating elements that usually have sheetmetal guards. The surface temperature of the coils is too low for strong radiation of heat, and the guards block most radiation that does occur. The heating coils may be enclosed at the bottom of a tall enclosure. In this case, the enclosure acts as a chimney, increasing heat output somewhat. The term “baseboard radiator” is often used for convectors.

Radiators and convectors operate with an efficiency of almost 100%, which means that virtually all energy absorbed by the units is delivered to the space as heat. Losses occur outside the space in the steam, hot water, or electrical systems that provide the energy.

The energy conservation measures explained here include the maintenance needed to maintain efficiency, how to install thermostatic radiator valves on units with manual valves, improved insulation, improvements to enclosures to avoid wasting the energy of the discharged air, and major system conversions. The latter include installing a vacuum condensate system, the techniques of converting from steam to hydronic heating, and improvements to the thermostatic control system. 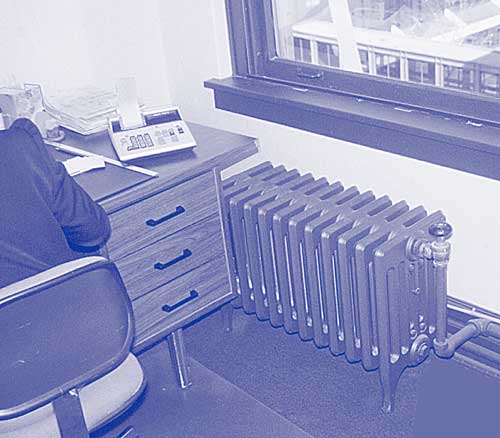