Multi-speed AC motors change speed by switching their internal windings. This is one of the most efficient methods of changing speed. Multi-speed AC motors are relatively inexpensive, simple to install, and free of the problems that plague some modulating types of variable-speed drives. Their main limitation is the stepwise nature of the speed change, which usually imposes an efficiency penalty in the overall application. The Note explains the speed options, efficiency, torque, and relative prices of these motors.

Another method of achieving multi-speed motor operation is to use two or more motors to drive a common piece of equipment. One motor runs while the other motor or motors idle. For example, two-motor arrangements are commonly used to drive fans in air handling units and cooling towers. The Note explains how you can achieve virtually any fixed combination of two speeds. The motors are conventional, so you can select them for high efficiency without making other compromises. Equipment cost is modest because the motors are conventional and because the smaller motor is usually a fraction of the size of the larger motor.

The variable-frequency electronic drive (VFD) has become the preferred type of adjustable-speed drive for many applications. The VFD changes the speed of the motor itself. The drive, which is totally electronic, changes motor speed by changing the frequency of the current that is supplied to the motor. They are used in combination with ordinary types of AC induction motors or synchronous motors, although it may be prudent to use special models that are designed to operate with electronic drives.

VFD’s can be reliable and trouble-free if they are selected and installed properly. Their advantages include high efficiency, large turndown ratio, ease of installation, even in retrofit, and low maintenance. However, VFD’s have operating limitations. In applications requiring high torque, it may be impossible to provide adequate motor cooling with conventional motors.

VFD’s can cause damage the motors they drive and cause a wide range problems in the facility’s electrical system if they are not selected and installed properly. Most of the problems arise from distortion of the voltage and current waveforms in the input and output of the drive, commonly called harmonic distortion. The Note explains the causes of the distortion, the problems it causes, and solutions.

Direct current (DC) motors and drives where the dominant type of adjustable-speed drive before variable-frequency drives became practical. There are still applications where a combination of a DC motor and an electronic DC drive is the best choice. Old motor-generators have been replaced by electronic sources of direct current for the motors. The Note explains the advantages and disadvantages of DC drives. Modern electronic DC current sources share some of the problems of variable-frequency drives, but the problems are generally less severe.

Variable-pulley drives are belt drives in which the effective diameter of one of the sheaves can be changed as the equipment is operating. Commercially available models are equipped to accept standard control signals. Variable-pulley drives are efficient and free of electrical problems. However, they have substantial limitations. The Note explains the advantages and disadvantages of these units.

Wound-rotor motors are an older type of motor that was designed for variable speed. The Note describes this type of motor, its advantages, and its shortcomings. 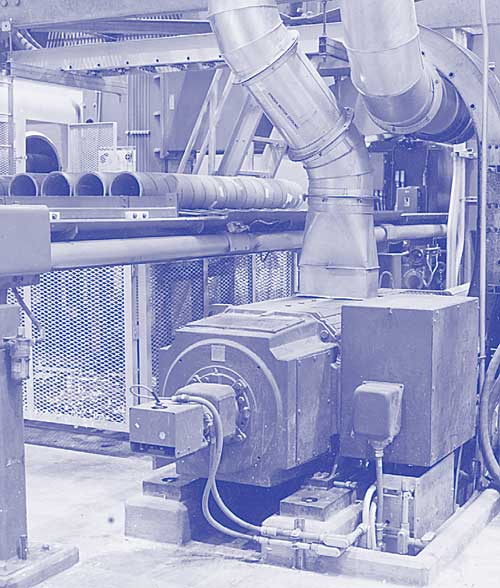